Cut a complex path at an intersection in Illustrator

I'm playing with a celtic knot work shape, which means that I want to split a path which crosses itself at that intersection. How do I tell it what segment I want to split?

If the path involves curves (which a Celtic Knot will), snipping away from the intersection then stretching the path will pull the curves, distorting them slightly. For precision, you will need to know how to control the 'stacking' order within a path.

Short answer: Use the pen tool to select the path endpoint on the segment of the path you don't want to be snipped. Then snip the exact intersection point.

Huh? What? Why would that help? Every path in Illustrator has a start point and a finish point (this is normal in vector paths, not just in Illy). When you use the scissors tool or similar at a precise intersection where a line crosses itself, it always cuts the section of the path closest to the start of the path (tested in CS4 and CS6).

Think of illustrator paths as always going under themselves, coiling downwards. It's kinda counterintuitive... I remember it by imagining illustrator sewing the paths into the canvas, carefully sowing the thread underneath earlier stitches (that works for me but probably no-one else...).

If it's a complex case (which any good Celtic knot will be...) and you need to see which direction paths are pointing (i.e. which end point is the start and which is the finish) add an "add arrowheads" effect, then remove the effect when you're done.

So why the pen tool? You can switch which way round an open line is pointing by using the pen tool to select the point that is currently the start point, as if you were going to continue drawing from there. This instantly turns it from start point into end point, reversing the path. If you've added arrowheads, you'll see this - the direction of the arrow will reverse.

In the above image, a curved path with an arrowhead on the finish point and its copy with the direction reversed were snipped at the exact point they intersect. You can see from the arrowhead on the newly created 'cut off bit' which segment of the path was snipped: it was the one closest to the arrow's start point.

Often it's a matter of stacking. Illustrator always wants to cut or select the top most path or anchor.

The easiest solution is to not be as precise in where you are cutting. For example, cut the tilted path a bit above the horizontal. Then just use the direct selection tool to move the anchor into the proper position. 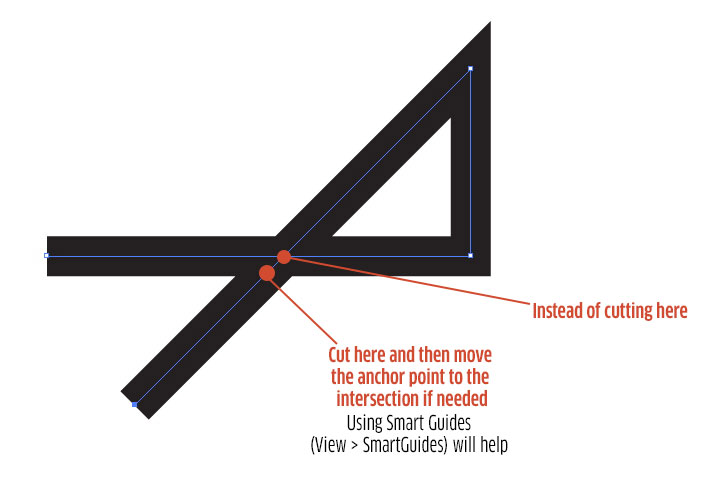 A third option is to draw independent paths so you can control the stacking order. For example draw the horizontal, then as a separate path draw the angle. Cut the angle where you want, then connect it to the horizontal path.