I am finalizing the last step of my logo redesign process.

Is it ok not to have a regular color when presenting my logo?

I am thinking about having a defined list of colors for different use cases but will this take away from my brand?

To maintain brand identity a logo should generally have a set color scheme.

If you vary beyond this and start swapping colors for every projects you greatly degrade any brand identity unless the color variations are for a very specific reason.

Think of any major brand... does their logo change colors beyond the 4 items listed above?

The only real exception I can think of is the FedEx logo. FedEx uses color variations to indicate various services. 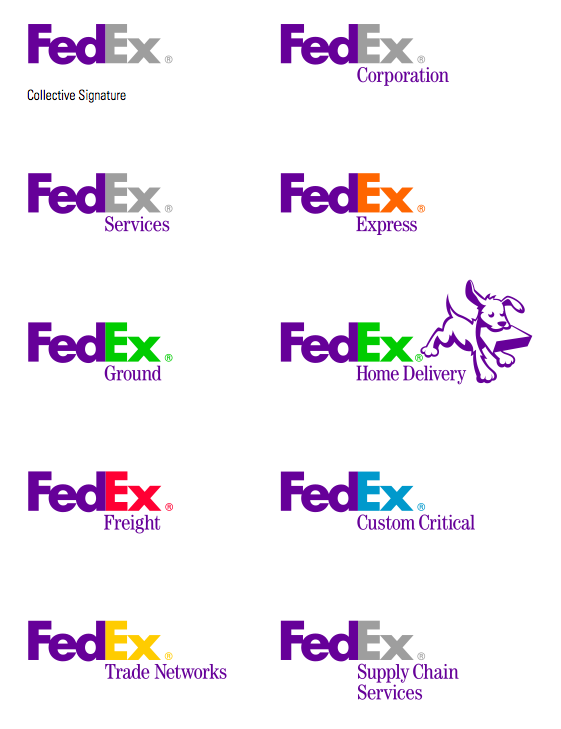 In this instance the color change makes sense. Since the base color (violet/purple) is used in all instances, the marks have the same basic structure and only the color of "Ex" changes. This clearly indicates a sub-set of the main corporation.

The essence of a logo, the only reason to have one, is that it builds recognition by repetition. Any variation, then, reduces its effectiveness by delaying the point where it achieves "instant recognition."

Scott's example is a good one. The base FedEx logo, with its "subliminal" arrow, was in use for many years before they began to alter one element to identity related but different "sub-brands." It is a very distinct and recognizable graphic form, and that form doesn't change at all. FedEx succeeded where, to take a recent example, Pepsi bombed.

There are only two major things that make a logo: its form, the major element, and its color. Neither should change. If the form must adapt for different purposes, you can get away with it if you carefully rearrange elements without changing their forms, but it's risky, and in that case you mustn't alter the color.

If the form is strong and distinctive, you can risk color variations as in the FedEx example, but then you mustn't change the form.