Is a DOT comprised of many PIXELS?

I', trying to understand difference between DPI and PPI.

I learned that a DOT is the smallest physical entity a device can show or printer can print and a DOT may consists of R,G,B elements.

A pixel is the smallest amount of information within a digital image.

So, does that mean in coloured picture each R,G,B value are individual pixel?

If so, then each dot consists of more than one pixel, am I right?

If I'm right is there some attribute like pixel per dot?

I like a lot the reasoning of the question. I will break a little a rigorous analysis for the sake of making this answer as simple (and practical) as possible.

Each dot consists of more than one pixel... Is there some attribute like pixel per dot?

This could be, to some extent, be the other way. One pixel formed by several dots.

And my short answer is Yes. There are some correlations.

A printed "dot" (as the basic unit of a printer) can contain only 2 types of states. Or is it printed or not.

A pixel is not only a digital "dot" it can contain different levels of information. The most basic type of pixel is a monochromatic 1bit pixel. It is the same case. Either you have a black pixel or you have a white pixel.

If you use a monochromatic bitmap the relationship can be exactly 1 to 1. One black pixel = one printed dot.

Most of the time we do not use a monochromatic image.

If I have a pixel that can have for example 3 values: 1-white 2-Gray 3-Black I could resolve this using a 2x1 dots grid. 0dot=white, 1dot=Gray, 2dots=black.

This means that the reproducible levels of gray depending on how many dots we assign to match the depth of the pixel.

Normally on commercial print we have 8-bit images producing our printed images. If we have a basic grid of 16x16 dots we can have 256 combinations of dots to have 256 levels of gray.

That is the basic relation you are looking for n_n

Things are a bit more complicated than that. But that relationship is a base to optimize these conversions.

I need to finish a paper and video about this. I am preparing physical tests, macro images, etc.

Some other variables, for example, Screen angle

16x150=2400 is a direct transformation when your screen angle is 0Â° and is the easiest to understand.

But we have some other angles, like a halftone screen at 45Â°, where we need a file resolution of at least 212ppi 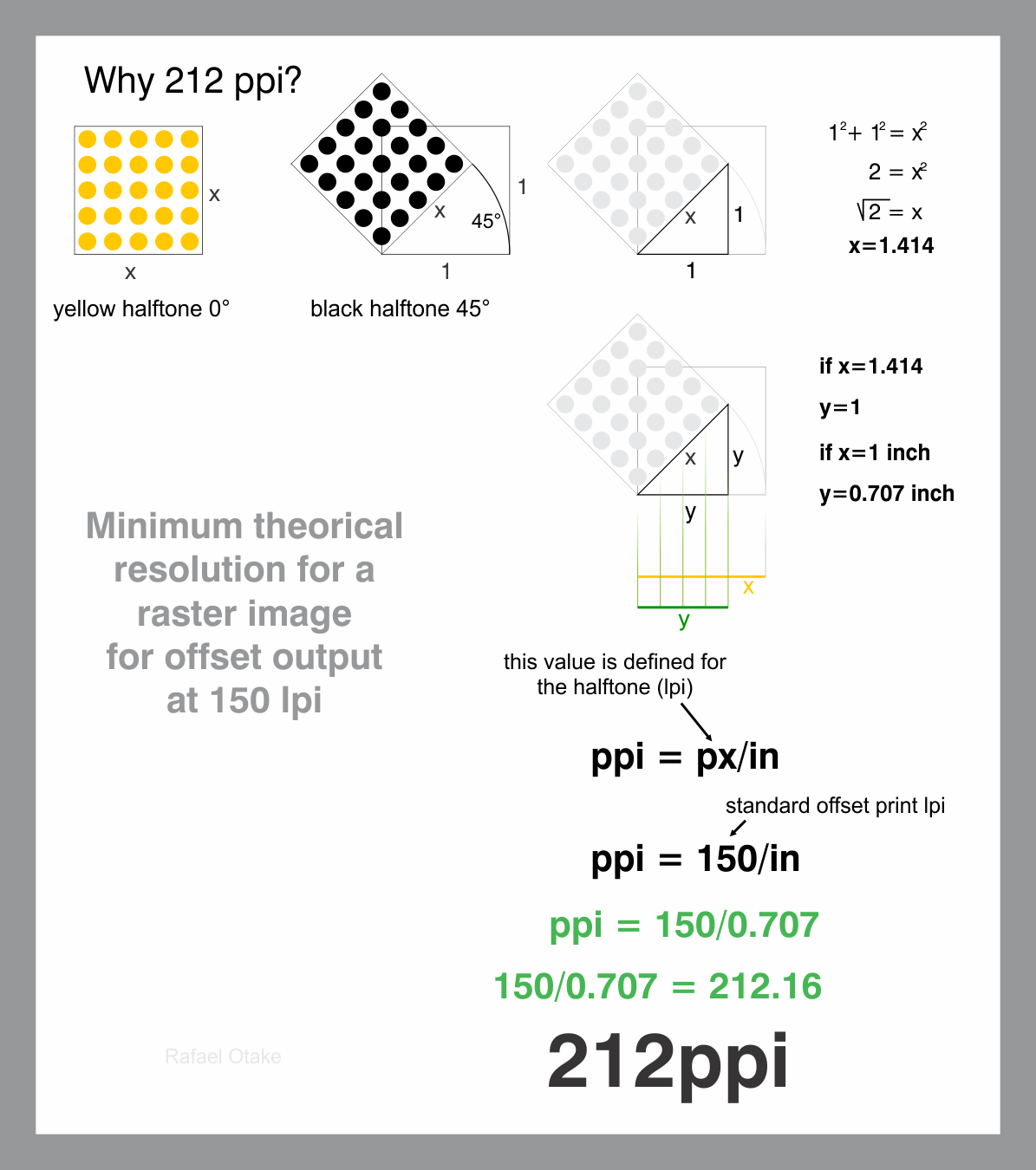 Here is a simulation of a 150lpi screen at 0Â°. Watch the red circle.

On the left, we have a 150ppi file. The circle could start growing for example from the center. 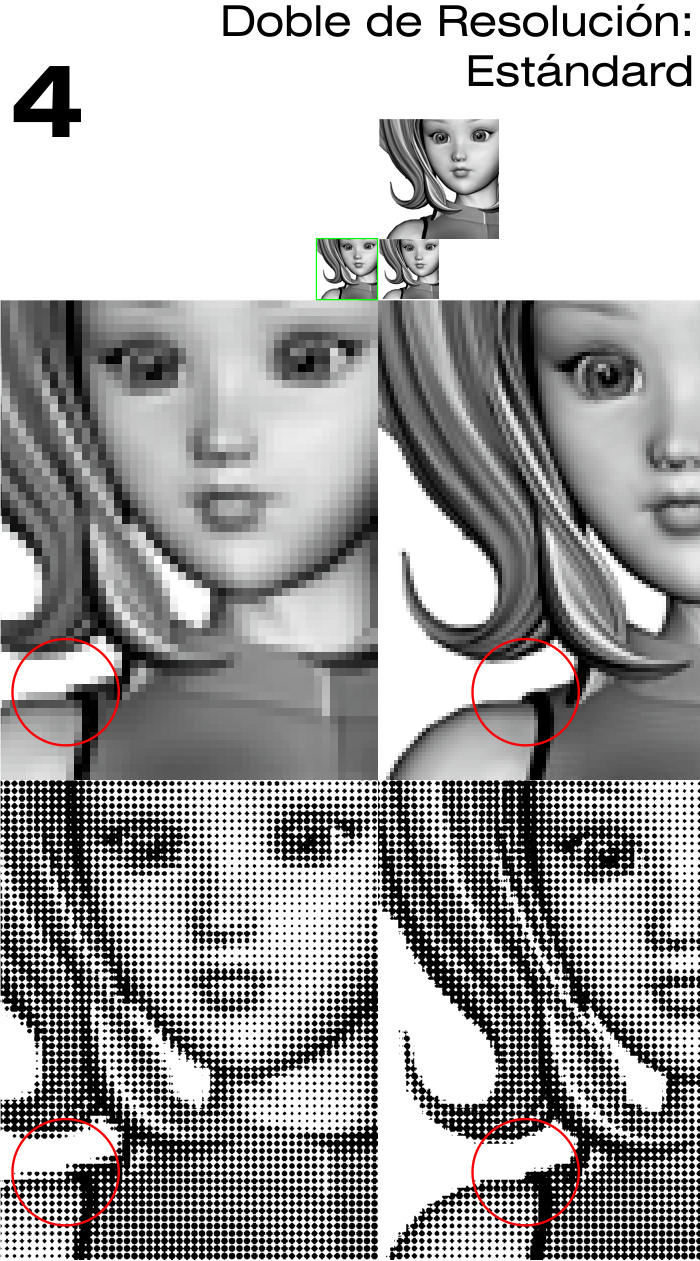 If we use a lower resolution, for example, 75ppi, each line-dot is repeated 2x horizontally and 2x vertically. and this will be noticeable as a pixelation. 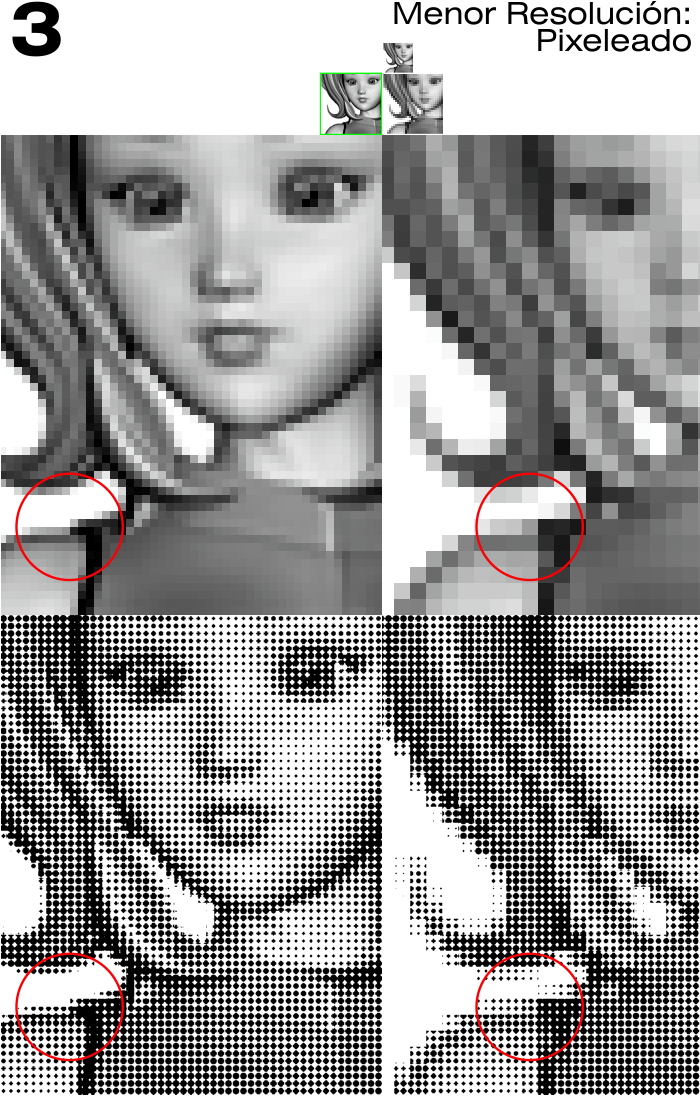 In normal halftone screens for commercial print we need:"

A lot of other things to consider

If we want to get rough I'm listing some other things to consider.

That was the easy part.

On inkjet printers (and other systems) we do not use a line. We shoot the dot directly into the paper.

The error diffusion shoots "random" amounts of ink droplets according to the percentage of the color they want to reproduce.

But they do not need to fill a grid, so it can shoot for example some droplets and shoot a different amount of droplets if it has some new color information next to it.

Think of the difference with the other approach. Using LPI will be like if "it's a military formation". But here we have "a bunch of civilian dots playing around". They produce an overall shade, but no formation is detectable.

This also means that you can use a 200ppi image and still will have more detail than the 150lpi counterpart.

But as this is random it would be impossible to say "this droplet corresponds to this pixel."

I ignore the internal algorithm used to produce the "randomness percentage", but there is a chance they have a 16x16 "grid" or 256 unit somewhere in the mathematics of it. They need to produce some density of droplets shoot according to one maximum unit.

You can stop reading here

If we treat a pixel just as an array of digital information, the trick is how to convert this information between information systems. 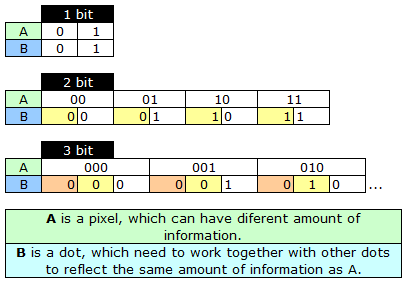 There is a direct correlation between a pixel depth and a dot array in terms of information.

Pixels have no size. Pixels are not a physical entity, they don't exist. You can't hold them, you can't touch them, you can't measure them. A pixel is merely the smallest increment your screen can display. The key words there are "your screen". The pixel size on a 1980 monitor will be different than the pixel size of a 2016 4K display. But they are both still pixels.

There is absolutely zero correlation between pixels and dots. None.

Now I fully understand where confusion sets in.

When software was being created in the 1980s there had to be some way to create a correlation between what is seen on screen and what is physically printed. So someone somewhere decided to make it so in applications referencing 1 pixel would see that reference as 1 dot when printing/outputting. But realize this was just an arbitrary designation and not based on any sort of equal measurements. They merely took the smallest digital increment for the screen and made that equal to the smallest physical increment on press in the application user Interfaces. That's all.

A "dot" on press could be 1 pixel... it could be 4 pixels ...it could be 5 pixels.. there's really no standard formula which can calculate how many pixels were used by looking at a dot.

Pixel density effects dots. The tighter the pixel density the more pixels there are in a dot. This is where the conversion happens between pixels and dots. And it's why Pixels Per Inch (PPI) is important, but still not the same as Dots Per Inch (DPI).

Pixels change size based on density. The more dense the pixels are the smaller they become. Dots do not change size. A dot is always the same size. The only difference with dots is the line screen. The line screen will control how dense, or close together dots are, but it never alters the size of the dots themselves, unlike pixels density.

This is why "print" images are suggested to be 240PPI or greater. To coincide with standard printing dots. A printer will use 150, 300, or more dots per inch. So the goal is generally to get the pixel density (how many pixels fill 1 inch of screen) to the same or close to the same increment that a press/imagesetter requires.

Since most commercial printing is done at 300DPI, getting a pixel density close to 300PPI is as close as you can "guestimate" to get pixels to be relatively close to the same size as a dot. In reality, it's not an exact measurement or science. it's just that this has proven to be the least troublesome method to get what's on screen to look relatively the same off press. But you will find that a 400PPI image prints pretty much the same as a 240PPI image because, when printed, the dots are the same for both images even though the pixels may be different.