For a little project of mine, I am working on creating a resource pack similar to the package found here. Essentially it is a pack of letters which have light bulbs to light the text. You can see an example below. 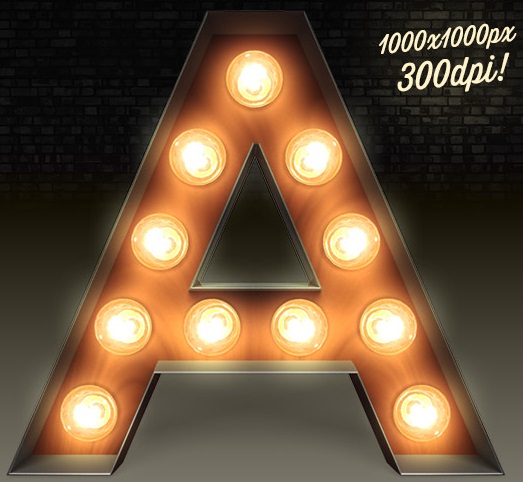 As you can see in this example the light diffuses around each light bulb to make the effect of the light illuminating the rest of the A. My question is what is the best way to create a similar light diffusion effect in Inkscape?

First off: Beware that Inkscape is for vector illustrations, so the kind of image effects you're asking for are not Inkscape's strongest suit... The result you will get with programs like Inkscape is bound to look "flatter" and less realistic than a full-blown light simulation a.k.a. 3D rendering / ray tracing. If you'd rather go in that direction, check out Blender and YafaRay.

Having said that, here's how I would go about imitating the effect in Inkscape:

There are two components to each light bulb: The body of the bulb and the glow around it.

There are several filters that sound like they could do the trick. Specifically, "Filters" > "Shadows and Glows" > "Cutout Glow", "Dark And Glow" and "Drop Shadow" (with a colored shadow) may seem like good candidates.

However, when you actually apply these effects, none of them give you the desired result. To see what I mean, make a filled circle that is larger than your bulb body, pick an orange glow color from the original image and apply each effect.

So instead of using pre-configured filters, I ended up with the following workflow:

In the original there is a distinct pattern visible amidst the glow and all across the letter. IMHO this is supposed to indicate either a) a coarse wood texture of the letter body or b) some sort of smoke / MoirÃ© / lens flare pattern. Either way it looks cool, so here's a suggestion on how to possibly achieve this effect:

Now obviously, there are still a number of elements missing, most notably the extruded aluminum / glass frame of the letter. Since you asked about the light diffusion effect, we're not going to deal with that here. However, I hope it has become clear how the basic effect can be achieved with simple shapes, fills, opacity and - most importantly - blur.

A final remark: The original image certainly looks very polished, so don't be surprised if you have to put quite a bit of effort into obtaining a similar result. I think it requires either a lot of manual illustration and refinement or some advanced 3D modelling / rendering skills to achieve an outcome this polished.