How to apply the difference between 2 colors to another color?

I have 2 objects that differs in color (Dark / Light variant). 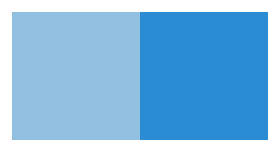 I want to create the same 2 objects but in another color scheme (Red, Green, Orange, Purple, ...)

This can normally be done by chaning the hue value of both images. I would then have something like the following:

However, I do have the light color available in all color schemes and I have the darker version only in the blue scheme.

So basically I want to calculate how much darker the darker variant of the 'Blue' is, and apply this to all the other 'light' colors that I do have.

How can this can be accomplished?

Here's how to do what you want to do.

Use the eyedropper with %-ages instead of HEX values unless you work in base-16 math. : ) I don't.

When you have read the difference in your test (blue) case, use the same differences for the rest of your hues. That's it.

Subtract the neutral density from your patches by subtracting the least value from all three values. (I've emboldened the lowest values to subtract.)

You'll get these values.

Do you see that the Green is nearly doubled in value, and so is the Blue.

Now, let's see what you did with the Red.

Subtract the neutral density from your patches by subtracting the least value from all three values. (Again, I've emboldened the values to subtract from the others.)

You'll get these values

Do you see that the Red has more than doubled in value as has the Blue? Both sets of patches increased by the same amount.

Using these numbers, you can sample any hue and increase or decrease the non-neutral primaries to produce any similar proportional difference. You could use the hex values in the same way but unless you have a hex-based calculator like I do, it will be painful but possible to do the same thing.