Been trying to search for an answer online for quite a while now but can't seem to find anything new. I'm familiar with layer styles and I've been merging them down to rasterize a layer, but for some reason none of this logic seems to be of any help with this particular case; Although a familiar concept, I must admit that I have never used layer styles to this degree, so the amount of variables is what gets me lost.

I was practicing with layer styles, mostly creating layers with flat single-colored areas of shape and experimenting with the settings. I ended up creating several layer copies with the same blobs, setting layer Fill to 0%, then applying different styles to them to create whatever is visible. Some style settings cause the blob to expand over the original shape's dimensions which I don't want, which calls out for a layer mask. But if you apply a mask directly to the layer, the style itself is affected by the mask boundaries, not just what you see, as would happen in case of normal pixels. As a workaround, most styled layers had to be placed into folders, and the mask stencil applied on the folder instead of layers. Actual layer fill set to 0% is because I was working with glassy objects and I wanted to focus fully on what the styles alone do.

All looks nice when the .PSD is open in Photoshop, but from there on, nothing seems to work. The image always ends up looking completely different when trying to export it into flat form. Especially light effects like bevel just seem to get baked to the image as full-on burnt white, even though the light that I'm seeing in Photoshop is subtle, three-dimensional, graded and translucent. Layer>Rasterize is greyed out. These are all of the things that result into an incorrect rendition:

I had to take screen captures to get the image to compare. Left: Every time a render, this happens. This example is without a background. Right: In Photoshop, the item floating half over opaque pixels and half transparency. 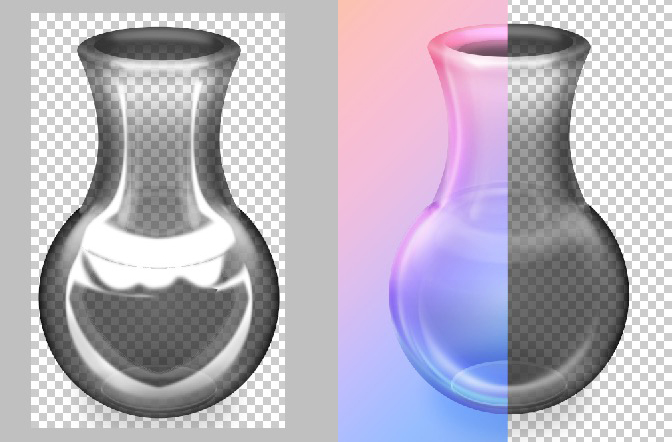 This is zoomed preview rendering issue in Photoshop. What you see when your artwork is zoomed to fit your screen (not 100%) isn't accurate and your flattened/rasterized image on the left in your example is actually what your artwork looks like.

When viewed at 100% you'll see that the effects stay the same before and after flattening/exporting/rasterizing.

When not viewing at 100% photoshop uses a different (faster and less processor intensive) method to render the layer effects for preview. Most of the time it works well, but in this case it seems to greatly affect the bevel and emboss layer effect.

Unfortunately this means that your artwork really looks the way you don't want it to.

Go to Preferences-->Performance---History and Cache Set Cache Levels to: 1 Quit and Restart Photoshop.

Now you'll see a more accurate preview at all scale levels, but with a performance penalty.

Here's a post on the Adobe forums discussing a similar issue.