What are the different stroke widths (e.g. in a W) in serif fonts called, and why do they have a particular orientation?

Certain serif fonts have distinctly different stroke widths for parts of certain letters (see WMVAU below) and there is a "correct" and an "incorrect" orientation. An example with Google Fonts Prata:

What is this called and why does the top one look "correct" and the bottom one "incorrect"?

It's called "Stress" and it's a remnant from when letters where hand-written by calligraphers and not yet printed by press.

A Brief Anatomy of Type I: Stress

The answer is really rather simple, and hails from the pre-printing days when books where still written by hand. During these times a tool called a calligraphy pen was used to produce hand-written volumes. These pens had a flat tip that resulted in a trademark thick-thin transition when the pen was angled a certain way.

After the printing press was invented by Gutenberg, letters were no longer written by hand with calligraphy pens. Instead, they were cast into metal representations of the letters that with ink could be used to â€˜pressâ€™ the letters onto paper in an instant.

To give the â€˜printedâ€™ books the same authentic look as the hand-written volumes, the metal cast â€˜lettersâ€™ used by the printing press were styled after the hand-written letters seen in volumes written with calligraphy pens. Thus, the thick-thin transition of stress is really just a throw-back to the days when books were written by hand.

Serif typefaces originated from carvings in stone in Roman antiquity. The variation in thickness of the lines (or line contrast) and the angle that the thickness changes (the stress) comes from how the letters were carved in to the stone with a chisel.

From: A Typographic Workbook: A Primer to History, Techniques, and Artistry
By Kate Clair, Cynthia Busic-Snyder:

Angled or oblique stress in the letterform developed when a flat-tipped pen or chisel was held at an angle as the letter was drawn or carved. The thickest area of the stroke is the area of maximum stress[...]

Serif typefaces can be grouped in to a number of classifications that, amongst other things, have different stresses and line contrasts. 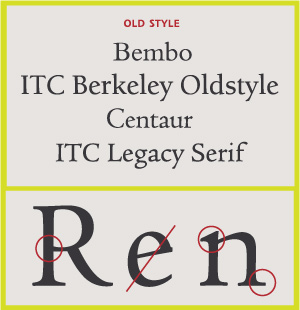 These typefaces date back to the beginning of the printing press and movable type. The contrast in thick and thin strokes is typically less than in later designed typefaces. Old style serif fonts have remained popular for setting body text because of their excellent readability on book paper. 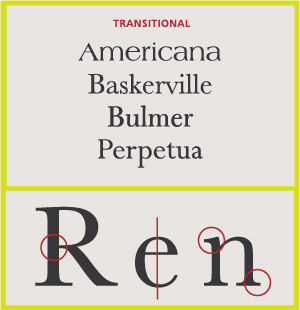 English printer and typographer John Baskerville established this style in the mid 18th century. [...] improved printing methods allowed much finer character strokes to be reproduced and subtler character shapes to be maintained. While the axis of curve strokes can be inclined in transitional designs, the strokes normally have a vertical stress. Weight contrast is more pronounced than in old style designs. 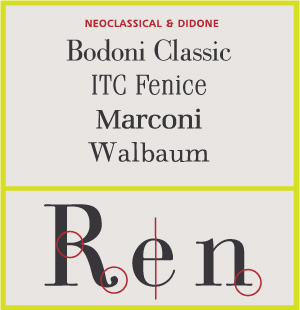 The contrast in thin and thick strokes in Modern serifs is much more extreme and with a vertical stress. This typically makes Modern serifs less suited (although not unseen) for body text and were therefore some of the earliest 'Display' typefaces.

When first released, these typefaces were called â€œclassicalâ€ designs. Early on, however, it became apparent to printers that these were not updated versions of classic type styles, but altogether new designs. As a result their classification name was changed to â€œmodern.â€

All Images and (unattributed) quotes from: fonts.com - Type Classifications