What is the difference between "wrapped" text and "constrained" text?

This question is based on the comments on this answer to another question.

What is the technical difference between text that is "wrapped around" a shape as opposed to text that is "constrained by" a shape?

Is this just 2 different ways to describe the same thing or are they opposing methods to conquer a similar obstacle?

The difference is really seen in line breaks, capabilities, and edit ability.

Text wraps are self aware. They see the object being wrapped and adjust when that object changes. Increase the dimensions of a wrapped object and the text reflows to work around new dimensions. Most apps also provide a method to adjust the offset of wrapped text. So you can easily control the distance text leaves around the wrapped object.

A quick example.... Photoshop CS5 constrained text. 12pt Times New Roman. The red line indicates the constrained shape (a shape layer). Note; I had to manually draw the constrain shape around the pill image. There is no automated method to create an odd shape for a text constraint. This, in itself is a HUGE difference compared to a "text wrap". 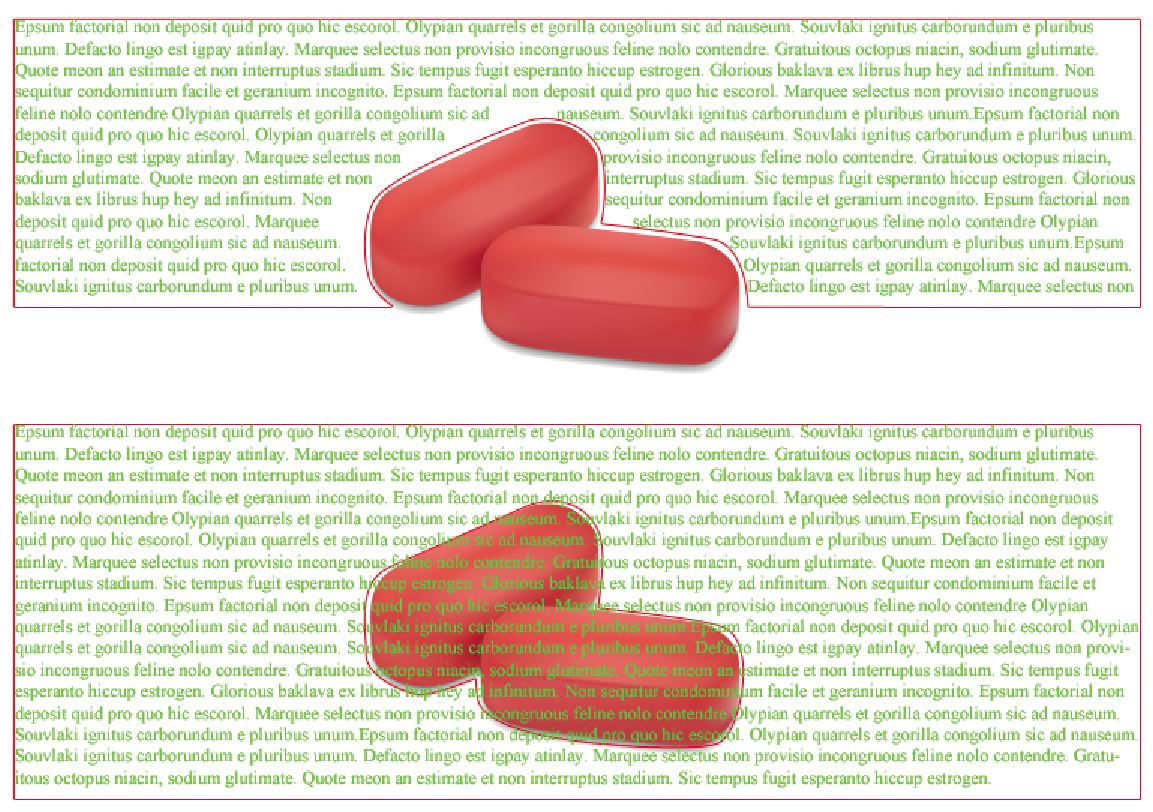 Note how, in the bottom image, although the original shape has a counter in it, the text completely ignores that hole and simply flows right over it.

Now a text wrap in Indesign. 12pt Times New Roman. The blue line indicates the text box. And I've set the wrap offset to 0.2pt to mimic Photoshop's constraint distance. Nothing was manually drawn except the rectangular InDesign text frame. There was no need for me to manually adjust for the shape of the pill image anywhere. 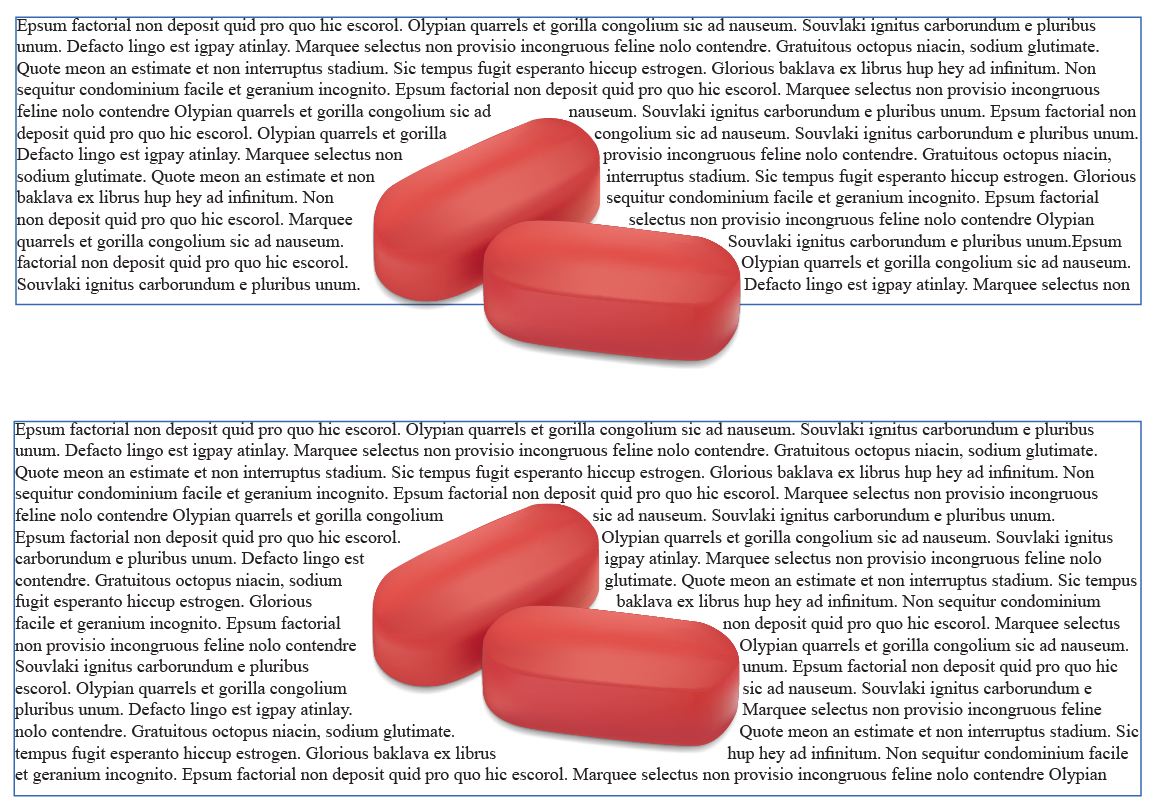 The obvious difference is the complete wrap in the lower image. You simply can't do that with text constraints and a single constrain shape. It would require two shapes and you would not be able to span text across both shapes. Granted, this particular example is an extreme. It's rare you'd want to have text flow from one side of an object to the other. But there are instances where you may want to wrap an odd shape - such as an arm or something thin which would not disrupt the readability if text were to flow on either side of the object. With a constraint you would have to resort to chopping text and copy/pasting sections of text in each constrain shape accordingly.

Now if I overlay the wrap on the constraint..... 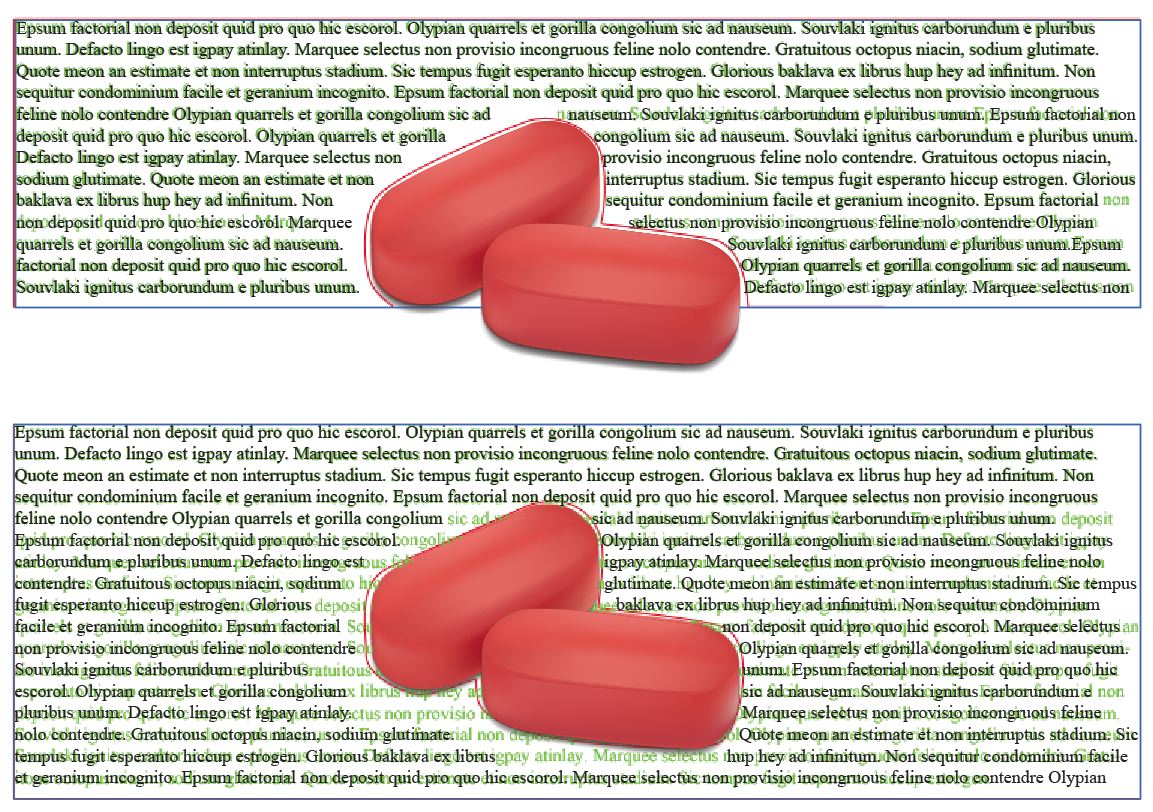 You'll see that visually the top image looks pretty similar. For this reason if you need to fake a text wrap via a text constraint, you may be able to use the constraint if you are able to draw a shape which only alters an outside edge. However, should you need to prevent text flowing over an internal item, and occasionally some odd shapes at the edges, the text constrain will fail in many instances.

In addition to all this there's ease of editing. A text wrap can generally be adjusted with 3-5 mouse click or key inputs. A text constraint requires the user to manually move anchors, paths, and handles to change the shape of the constraint.

In the end.. Can you fake a text wrap with text contraints? Yes. Absolutely in some cases.

Are text wraps and text constraints the same? Absolutely not.

Text wrap, strictly speaking, is "controlled" by the object being wrapped around. In Illustrator or InDesign text wrap is a property of an object, such as an image, that is honored by text objects when they hit its wrap border. If you move the image or the text object, the text automatically adjusts, under the control of the wrapped object.

Constrained text is what the name implies. You create a shape and fill it with text, which is constrained by the shape it's in. The edges of the containing shape control how the text flows.

It's possible to have constrained text (in a circle, let's say) that is also affected by text wrap from an overlapping image.

At a gross level, there is no visible difference between text that "wraps" around an object in Photoshop because it is constrained by a shape, and actual text wrap done in Illustrator or InDesign. The experience in the authoring tool is entirely different, however.

As an aside, one web authoring tool that offers text wrap in its WYSIWYG editor is Xara. Adobe's Muse beta has the same capability, although it is implemented rather better than Xara's, which uses absolutely positioned spans (I kid you not) for every line of wrapped text.