Overlay a graphic on a photo or image

How would I overlay a graphic (a logo in this case) on a t-shirt and make it look like it's really there, not just superimposed (wrinkles, lines, etc?) I don't have photoshop or any adobe software, unfortunately, so a GIMP solution would be best.

If it's a white t-shirt and the logo doesn't have white parts that need to be visible, then you can just go to the Layers panel and switch the "Mode" setting to multiply.

Actually, I have a better idea: if you start with a white T-shirt and set its layer mode to "Multiply", you can put the logo on a lower layer and it will automatically be shaded as if it was printed on the T-shirt. Better yet, you can also change the color of the shirt itself by putting a solid color layer below the logo.

Let me demonstrate this technique. I'll start with a simple picture of a plain white T-shirt on a neutral background: 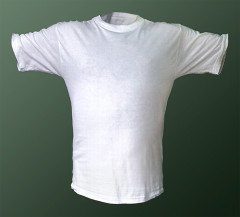 (Actually, I based it on this picture of a Wikipedia T-shirt by ArtMechanic, licensed under GFDL / CC-By-SA 3.0, and resynthesized out the original logo.)

Next, I'll duplicate the layer and cut the T-shirt out of of the upper layer, leaving only the background: 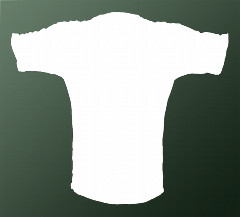 (I actually used a layer mask to make the shirt area transparent. The transparent area shows up as white above, since I saved the picture in JPEG format. Since this is just a demonstration, I didn't do a very careful job, but that could be easily fixed by editing the mask by hand.)

After that, I change the mode of the lower layer to "Multiply" and add a new white layer below it. At this point, the picture still looks exactly the same as when I started. However, I can now add some extra layers between the white bottom layer and the T-shirt, which will show up as if they were printed on the shirt. For this demonstration, I'll use the GIMP logo: 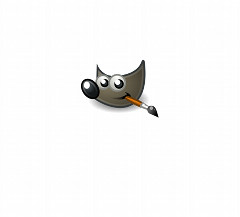 I'll also add some solid color layers below it, to show what the shirt would look like in different colors. At this point, the layers look like this: 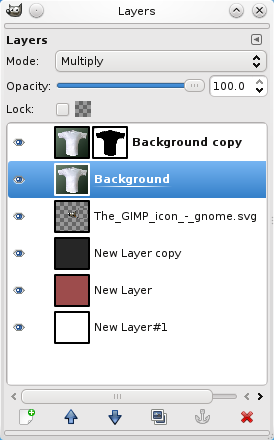 ...and the final picture, with the various color layers visible, looks like this: 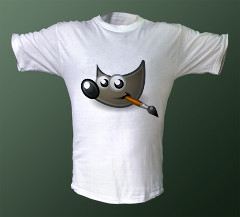 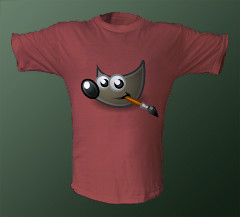 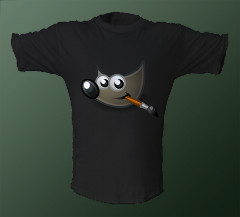 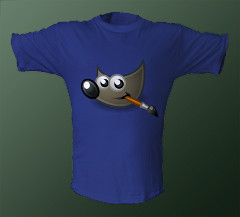 (I added the blue layer after I took the screenshot of the layers dialog, and didn't bother to take it again. Note that the black layer isn't actually black — it's 85% gray. If it were completely black, you wouldn't be able to see any shading on the shirt.)

Actually, after doing this demonstration, I thought of one more trick: if, instead of using the "Multiply" mode, I'd used Layer→Transparency→Color to Alpha... on the shirt (with white as the transparent color), I could've merged the top two layers and saved the result as a transparent PNG image. Then I could've used CSS to position that image on top of any other appropriately sized image on a web page, making that image look as if it had been printed on a T-shirt!

Also, I realized only afterwards that it might've looked better if I'd made the transparent areas of the top layer just a little bit opaque (say, 5% to 15% opacity), so that, effectively, the logo and color layers would get slightly lightened. That way, even using a 100% black color layer at the bottom wouldn't totally destroy the shading on the shirt.