How can I turn a polygon into a separate object?

I'm trying to turn those wings/canards/engines into different objects, so they won't be affected by the smoothing I'll do later on. PS: don't mind that little glitch on the wing, that only happened due to the view "pos". PS 2: Any comments on my fighter jet? (any obs or suggestions) 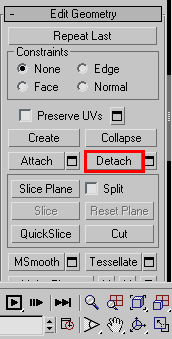 This is not reccomended, you better clasify the polygons in different smoothing groups as explained in this tutorial.