How can I legally design something which looks like US currency notes?

I've been asked to create artwork for a mock US currency bill.

Similar to those fake novelty bills you can purchase. 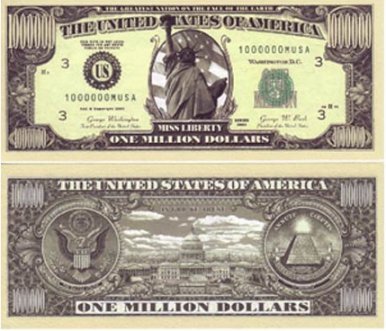 The end goal is not to reproduce currency accurately, but to trick the reader into thinking it's currency at first glance. So, to this end, the artwork needs to closely resemble a real bill, but be different enough to be legal and not seen as counterfeit.

I am aware of US Legislation regarding reproduction which states:

Section 411 of Title 31 of the Code of Federal Regulations permits the printing, publishing or importation, or the making or importation of the necessary plates or items for such printing or publication, of color illustrations of U.S. currency provided that:

However, clearly the novelty bills don't follow the size restrictions above (they are the same size as real currency).

How do these novelty currency bills get away with ignoring the reproduction size restrictions? In addition to being two sided?

Is it merely due to the clear "novelty" aspect which allows them to come closer to real currency? After all, there's no real "million dollar bill" so clearly it can't be legitimate currency.

Wikipedia states that these novelty bills are legal because no "real" bill of that denomination exists. Is this accurate? Given the nature of "anyone with a computer and browser can edit" I'm somewhat skeptical of wikipedia for these types of issues.

After researching and researching on the internet I was unable to find any official documentation regarding novelty notes. Yes there are ton of web sites that passingly state, "It's fine if you aren't trying to defraud." But some random web site having this posted with no follow up was not solid enough for me.

The closest to an official stance I could find was on the US Treasury's web site:

Did the Treasury Department ever produce a $1 million currency note? I have one that I want to know about.

We receive many inquiries asking if the Treasury Department ever produced a $1 million currency note. People have sent in copies of these notes. We have found that they are nonnegotiable platinum certificates known as a "One Million Dollar Special Issue." These notes were from a special limited copyrighted art series originally sold by a Canadian firm for $1.00 each as a collectible item. They are not official United States currency notes manufactured by our Bureau of Engraving and Printing (BEP). As such, they are not redeemable by the Department of the Treasury.

You may be interested to know that the BEP learned of these certificates in the spring of 1982. All related correspondence was forwarded to the United States Secret Service to decide if there were any violations of Federal currency laws. The Secret Service subsequently advised, however, that these certificates did not violate any United States law.

Other sites such as the US Secret Service And the Bureau of Engraving and Printing State the laws regarding reproduction of actual denominations. Much of @AmphiteÃ³t's excellent answer refers to these.

The Counterfeit Detection Act of 1992, Public Law 102-550, in Section 411 of Title 31 of the Code of Federal Regulations, permits color illustrations of U.S. currency provided:

The illustration is of a size less than three-fourths or more than one and one-half, in linear dimension, of each part of the item illustrated

The illustration is one-sided

All negatives, plates, positives, digitized storage medium, graphic files, magnetic medium, optical storage devices, and any other thing used in the making of the illustration that contain an image of the illustration or any part thereof are destroyed and/or deleted or erased after their final use Counterfeit Detection Act of 1992

Other Obligations and Securities

Photographic or other likenesses of other United States obligations and securities and foreign currencies are permissible for any non-fraudulent purpose, provided the items are reproduced in black and white and are less than three-quarters or greater than one-and-one-half times the size, in linear dimension, of any part of the original item being reproduced. Negatives and plates used in making the likenesses must be destroyed after their use for the purpose for which they were made. This policy permits the use of currency reproductions in commercial advertisements, provided they conform to the size and color restrictions.

Motion picture films, microfilms, videotapes, and slides of paper currency, securities, and other obligations may be made in color or black and white for projection or telecasting. No prints may be made from these unless they conform to the size and color restrictions.

All this was very, very clear. However, this doesn't seem to cover, imply, or state anything with respect to non-real denominations.

So as a final resort I contacted my local field office for the Secret Service. I spoke with an agent and explained what my desires were.

The agent's immediate reaction was the following....

"If you're looking for something which states what you can do in terms of "novelty" or non-negotiable bills, most likely, you won't find such a statement. However, what you've expressed sounds okay. The US government understands that notes are often represented in sales and advertising and provides some leeway provided there is no intent to defraud."

The agent did also have one other very important stipulation:

Nowhere was I able to find that information and I would not have known it were it not for my call to the Secret Service. It was this type of information which concerned me when I posed the question.

The agent also expressed that if the illustration/design were complete and there is any uncertainty regarding it, the Secret Service is happy to take a look at the artwork and make a direct judgement based upon seeing it.

So, if anyone else comes across this, I would encourage them to contact their local Secret Service Field Office and merely express what it is you are trying to do and how you can ensure no problems arise.

Be aware I was not seeking to deface existing notes or to create a note which would resemble any actual denomination created by the Federal Reserve. Those are entirely different matters with different restrictions and issues.

This should not be seen as legal advice by any means. This is merely my own account of this issue, as I confronted it, and the resolution I found.

On the bright side.. I just made a million dollars!!!!! You don't get to say that every day :)

A brief exploration of the statutory sources you provided may help. Generally you should rely on the plain meaning of the text in the statutes and regulations, as well as on general construction canons. Public Law 102-550 contains the Annunzio-Wylie Anti-Money Laundering Act which deals with counterfeiting deterrence measures amongst other things. In particular, Sections 1553/1554 of this Act modified two sections (474A and 504) in Title 18 of the United States Code about counterfeiting and indicated in the latter that the Secretary of Treasury would issue regulations about color reproductions of currency.1

Later on, Section 411 of the Code of Federal Regulations indeed provided a specific exception and 61 FR 27281 discloses the context for the Secret Service making the regulation. This enables printing color reproductions with size constraints etc. and preempts any rule you would find in the U.S.C. about currency. Still, you need to look at the legal framework unto which it relies, and currency is not the only restricted instrument. Nor printing the only activity that may be scrutinized. Some rules make up Chapter 25 - Counterfeiting and Forgery and one must not do any of the things specified therein. For instance Section 471:

Whoever, with intent to defraud, falsely makes, forges, counterfeits, or alters any obligation or other security of the United States, shall be fined under this title or imprisoned not more than 20 years, or both.[my emphasis]

Beyond object specific rules, you may also find further restrictions about the medium or process in both the Chapter 25 and supporting regulations. Such as those pertaining to the designated paper and security features (it is not limited to paper per se, see s. 474A). Strictly(with or without intent), one cannot possess a "paper" alone or the "paper" with security features adapted for obligations or security instruments of the U.S., once either of these have been designated by the Secretary of Treasure. There seems to be no requirement for any reproduction to appear on the medium.

Another instance where unlawful intent is not a requirement is section 474(6) about whoever prints, photographs, or in any other manner makes or executes any engraving, photograph, print, or impression in the likeness of any such obligation or other security, or any part thereof[...].3 This could potentially have an impact, for instance if one were to fail to comply with the (411 exception) constraints(size, single sided etc.) while printing color illustrations of the U.S. currency.

Staying away from the security and paper features, not photographing nor scanning currency, not using denominations that existed, not using the same size, color, portraits etc. may help. But considering the potential for strict criminal liability with some infractions, I would seek legal advice before proceeding. The agencies involved should also provide further guidance and services and you would expect any number of them to intervene if a product generates complaints or affects economic wellbeing on a large scale.

2. Infractions related to using counterfeit money(such as uttering) are not related to the reproduction process - they make the bulk of the news because uttering is also a felony crime and the context is often ridiculous(someone tries to pay a meal with a trillion dollar bill etc.). Furthermore, there is no discussion of likeness in this context(which is most likely a factual matter left for the courts i.e. counting features, having experts say to what degree it's "identical" etc.). A typical case such as Harrod contains a discussion on the meaning of similitude with a list of authorities to explore this further. Traditionally this is about criminal conspiracies.

3. Boggs v. Bowron, 842 F. Supp. 542 (D.C. 1993) is about a known American artist and discusses section 474 paragraph 6. The First Amendment implications of this are exposed at lenght in Money Talks: The First Amendment Implications of Counterfeiting Law, by Julie K. Stapel, 71 ILJ 153(1996) (when only B&W was allowed with constraints). The article argues that ss. 474 and 504 constitute a content-based restriction and that: By censoring expression containing depictions of currency, the government favors one view over another and violates one of the central tenets of the First Amendment, that "government has no power to restrict expression because of its message, its ideas, its subject matter, or its content."(p.171). This is still pertinent because the color reproduction exception(411) is basically a copycat of s. 504 with color instead of B&W.