I just want there to be even leading between lines in my text box, but the leading between the first two lines is always greater even when I change the leading from Auto to a fixed number. I have also revealed hidden characters and there are Paragraphs between all my lines, so it isn't like a soft return issue. Not sure what is going on. Thanks!

Sorry the text changed but I have the same problem here. I have attached images of me selecting all of the text including special characters in case you think I am fibbing you. 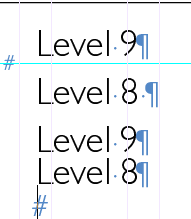 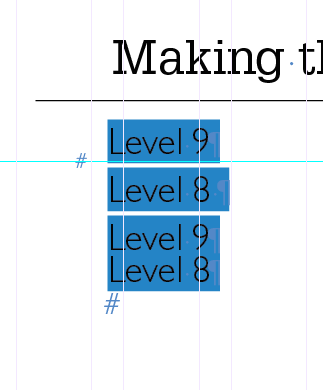 Looking at your screenshot, you have a couple of discretionary line breaks after the second date which are a different point size from the text. "What's that got to do with it?" I hear you cry. The answer is that in InDesign, leading is a character attribute rather than a paragraph attribute. One character with larger-than-the-rest leading will affect the entire line.

Here's InDesign's hidden character secret: any character in InDesign, including a number of special characters that are normally hidden, has formatting applied, including point size and leading.

The paragraph mark is the even-more-special character. It stores the formatting for an entire paragraph and its own formatting as a character. If you reduce the point size of some text by highlighting it and changing in the Character Panel, but you haven't selected the paragraph mark (a very easy mistake to make), the visible text will change but the leading on the last line won't. Because leading is a character attribute, the whole last line will retain the larger leading value of that hidden paragraph mark. (That's why one of the telltale signs of a layout created in InDesign is extra leading on the last line of a paragraph.)

The same applies to other hidden characters, and to non-printing characters such as spaces. A 10/12 line with a 12/14.4 space somewhere in it will use a leading value of 14.4.

Whenever you have baffling line spacing issues, select ALL the text including the hidden paragraph mark just after the last visible character and explicitly set the point size and/or leading (which will be blank in the Character Panel, indicating that multiple values have been selected).

In Preferences > Type you can turn this character by character behavior off by checking Apply leading to entire paragraphs, in which case InDesign will override the character leading and use the value stored in the paragraph mark for the whole paragraph.