How many variables can I represent graphically before losing clarity?

Let's see if I can explain this graphical economy question I have correctly. I'm new to the field and it's worth mentioning this is pure curiosity, and my examples are - as you will be able to tell soon - completely made up.

How many variables can I represent graphically before my graph loses communication quality? Supposing my audience is, for example, Sunday newspaper readers.

Now, I know I can add another variable using the size of the circles, so if I want to add a representation for how many burgers Jane and Joe eat a week (10 and 20, respectively), I could have something like:

And I can even use shape or color + size to add a fourth variable, for example if they eat more cheeseburgers than beef burgers (limitation here is that the type of burger is a boolean, with only two possible values), but anyway:

And this where I think it starts to get messy. Adding shapes to the combo to represent a fifth variable would risk the 'ease-of-comprehension' of the graph. When I look at the graph, my (particular) brain only processes maybe 2 or 3 variables, no more. Do they eat combo or just burgers, for example?:

I thought of maybe a 3rd dimension, but that would look just terrible. I might be thinking about this in the complete wrong way, and chances are I am missing something quite obvious here that I cannot grasp (for example, if trying to represent more than 3 or 4 variables is just wrong as a practice), but back to my question(s):

Edit III: I found an imensly gorgeous example of multivariable quantitative data visualisation, and had to add it. You will find it under the heading "Edit III (Nobel laureates)".

Edit II: there has been a little misunderstanding, and I have edited to try to clarify how I interpret the intended use of the data. I have replaced two images and added a section "Do you want fries with that?"

Clutter and confusion are failures of design not attributes of information. Clutter calls for a design solution, not content reduction. Quite often, the more intense the detail, the greater clarity and understanding, because meaning and reasoning are relentlessly CONTEXTUAL. Less is a bore.

Why do we visualise data?

is what you can extract from data. By displaying data somehow, we can glean information. One of the examples I often use, is that if I give you a list of the countries of the world and tell you that two are missing, it is highly unlikely that you will find them based on that list. However, if I display this by colouring all the countries I have on a map, you will instantly see I have omitted the the Central African Republic and New Caledonia. This is "reducing noise" and telling a story in the most effective way possible.

I hesitate to call your example infographics. I know this is often seen as synonyms to data visualisation, information design, or information architecture, but I disagree. Infographics - to me - are a series of graphs, diagrams and illustrations that might well contain a bunch of biased statements on how to read the data. It is less objective, more prone to skip data that are not in the "interest" of the creator: you are guided towards a conclusion that someone predefined. They have entertainment value, and they often have overwhelming use of illustrations that takes away some focus from the data. This is fine but I think we should differentiate a little.

Bear in mind that big data is not the same as complex data. Lots of data can be just lots of the same, such as this LinkedIn map: the core data is the same, but there are filters (by tagging). There are two variables: geography and some sort of tag defining people into professions/interests/relations. Insane amount of data; but only two variables. 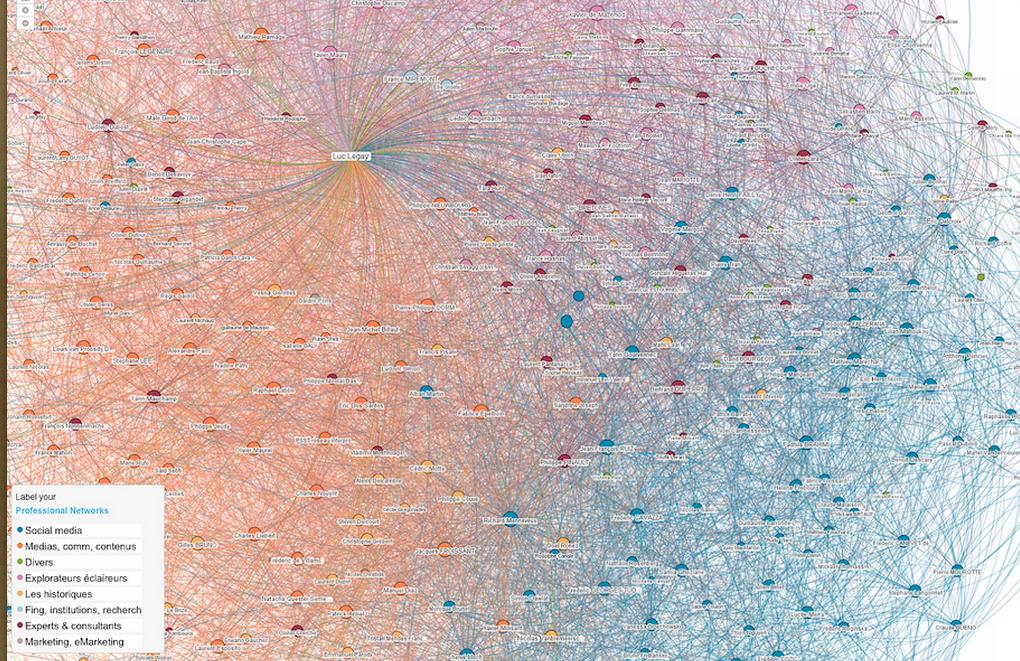 Here is an example of multivariable visualisation of data. This is Charles Minard's 1869 chart showing the number of men in Napoleonâ€™s 1812 Russian campaign army, their movements, as well as the temperature they encountered on the return path. Big version here.

It takes a little time to crack the code, but when you do it is splendid. The variables covered are:

That is an amazing amount of information in a simple, two-coloured map. The geographical part is stylised to give room to the other variables, but we have no problem getting it.

Here is a more tricky one. This will be a lot easier to read if you are familiar with basic evolutionary visualisations, cladograms , phylogenics and principles of biogeography. Bear in mind it is made for people familiar with this, so it is a specialist, scientific chart. Here is what it shows: A phylogeographic image of poison frogs lineages from South America. Maps on the left show the main biogeographic regions as they change through time and the image to the right shows the frog lineages in context of their biogeographic origins. (By Santos JC, Coloma LA, Summers K, Caldwell JP, Ree R, et al. [CC-BY-SA-2.5 (www.creativecommons.org/licenses/by-sa/2.5)], via Wikimedia Commons). When you "crack the code" it is wildly, amazingly informative.

I cannot stress this enough: never underestimate the value of repeating information, or dividing it into separate identical visualisations. As long as it is reasonably easy to compare one graph with another, this is perfectly fine. We are pattern-finding machines. This is often referred to as small multiples. We have few problems analysing these images quite quickly, and cramming everything into one large graph is often pointless when ten small ones will work even better: 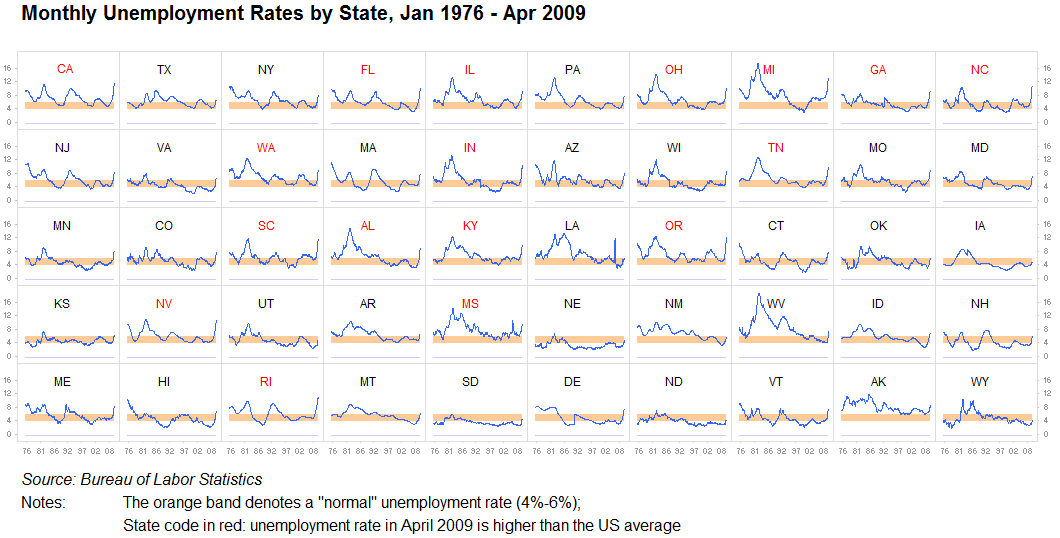 And one that uses different but repeating graphics:

Sparklines are a term coined by Edward Tufte, and also developed into a fully functioning, fully customisable javascript library. They are basically tiny charts that can be inserted in text, as part of the text and not as an "external" object. Here is what the default look like:

I just had to add this data visualisation I found, it is simply too good: it shows Nobel laureates. What university, what faculty, subject, year, age, hometowns, wether it was shared, degree level. Beautiful evidence indeed. These are all quantifiable data. More here. 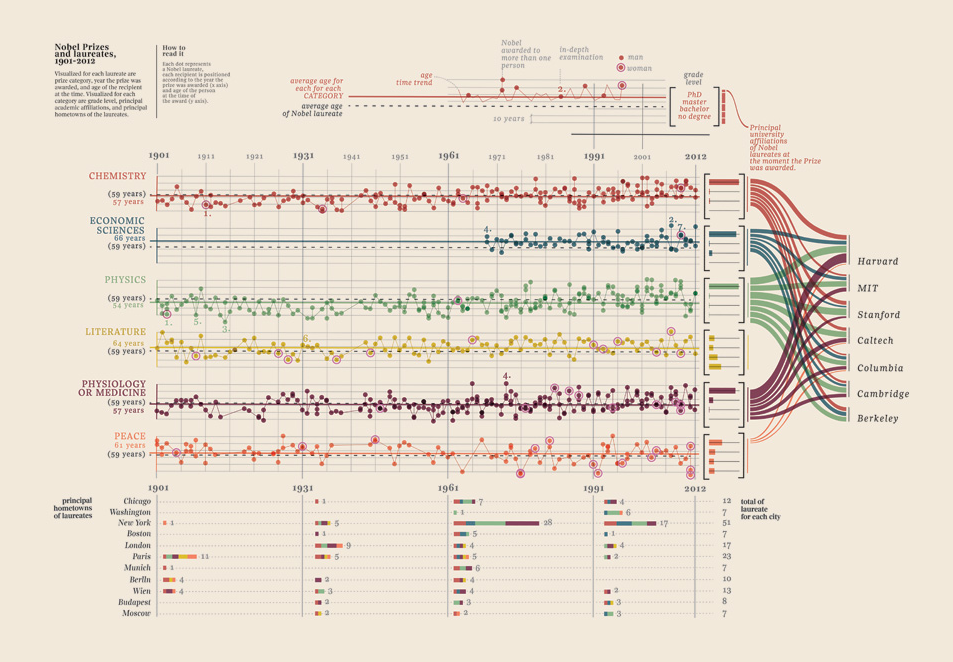 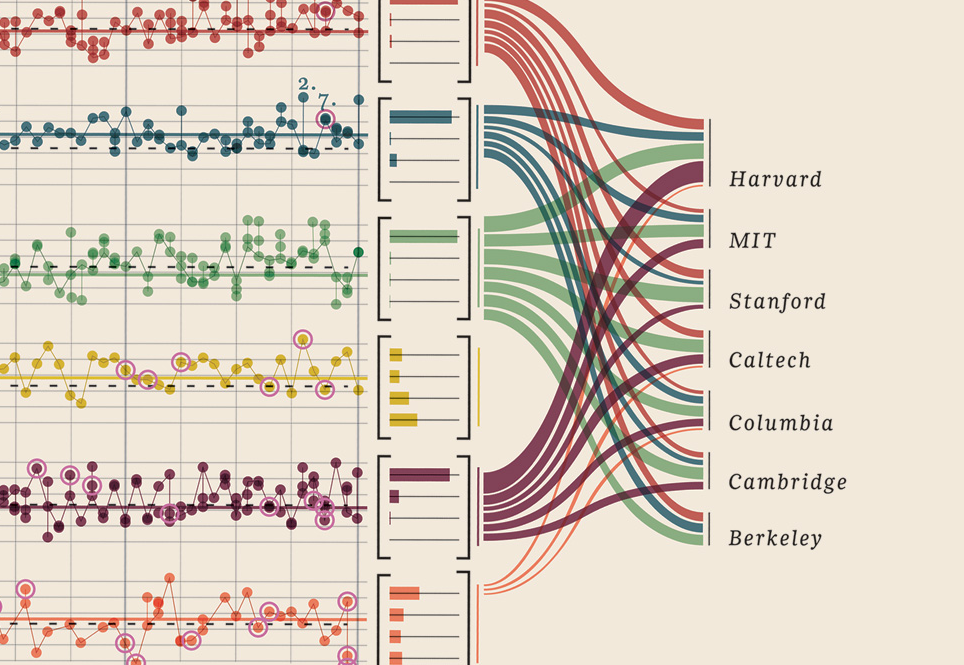 All of the questions @Javi poses are extremely important.

What you are trying to do is create a visual tool for thinking. To do so, you must extract the best quality of signal to noise ratio. What you are struggling with is how to correlate data that have different variables, into information. Here is a question: what needs to be approximately right and what needs to be exactly right? What is the aim?

I am going to assume that you want to display the data without too much bias: you want the reader to find correlations themselves, if there are any correlation to be had. Your aim is not to tell people that burgers are bad for them or that women eat less burgers than men, but to let them "see" it, if that is what the data contains (imagine if those three people were a family. That would swing our view on the whole burger-eating-graph a tad).

Your dataset is so tiny, you could simply put it all in a table and it would be fine. But of course this is about the general idea:

A little detail: time (age) tend to be something we see as horizontal from left to right (timelines). Weight something that is up-down, so switching your x - y would be a good idea.

1. What are the unique, fixed entities?

Note: your data consists entirely of units. Countable, quantifiable each on a separate mental scale. Kilo, age, weight and numbers. And in database-speak, their names are the keys. When you start getting to make space-time visualisations, it becomes a real headache. Imagine that you should add birthplace, current home etc.

The only two here that has correlation is the number of burgers and wether or not it is a combo. All the other variables are independent, and only one is fixed (name). At some point, with large datasets, even names becomes uninteresting, and gets replaced by demographic, age, sex or suchlike.

With that tiny dataset, you could get it all in one graph, for example like this: 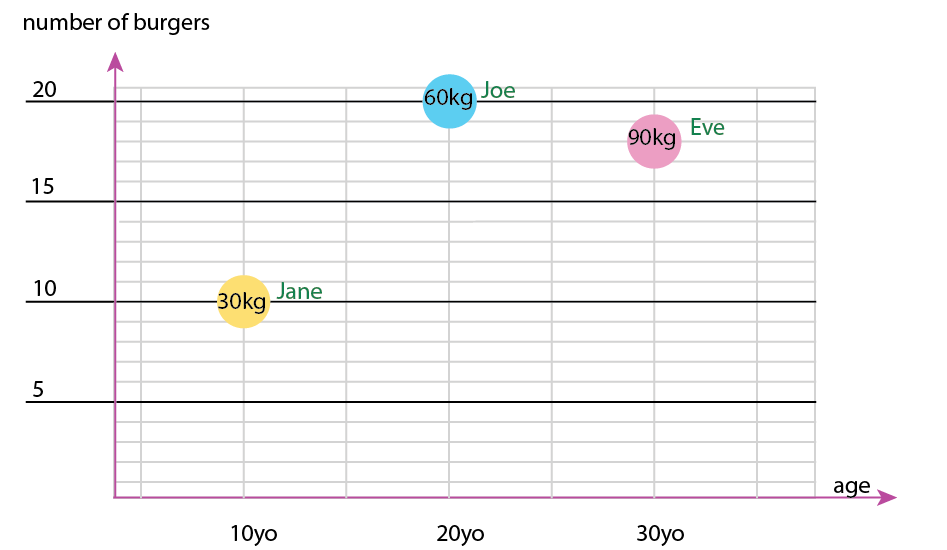 Or you could turn alter the axis and name-bubble content:

Personal note: I think this is the better of the two, because the x and y contains "physical" properties of a human being. The variable in the bubbles here are number of burgers. 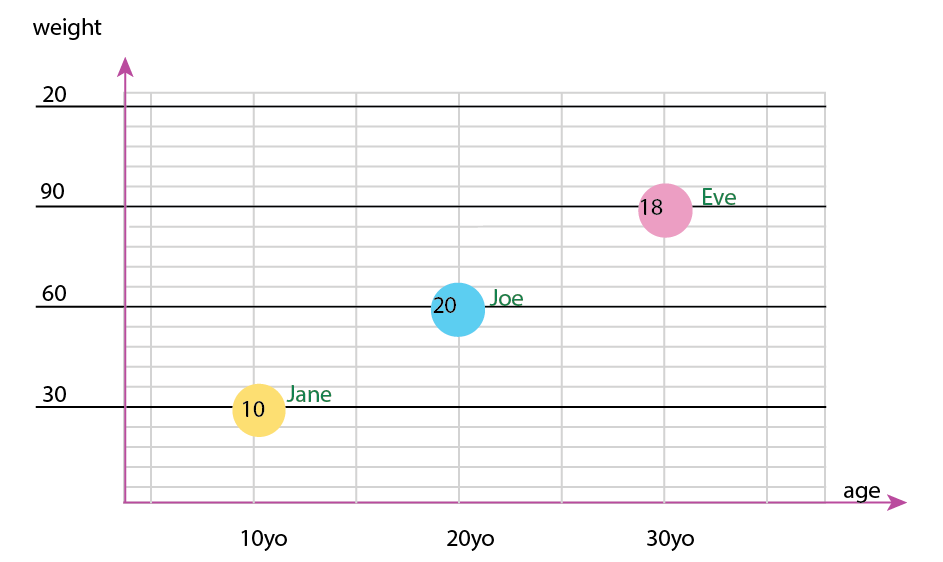 You could also add pie charts in addition to the graph, or even only have pie charts. Personally I would have both, as mentioned about small multiples: 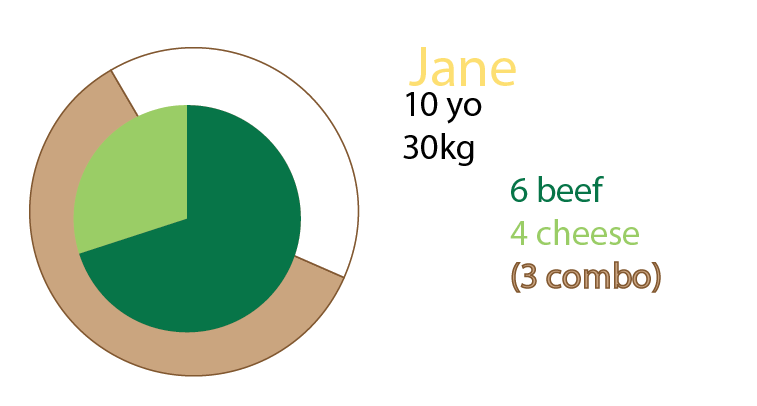 Do you want fries with that?

My assumption was that we also wanted to know the ratio of burger to meal. Every meal contains a burger. Not all meals are combomeals.

If 1., a boolean applied to the name/key/id would do.

If 2., we could apply a boolean to each meal:

That is very tedious, so we could break it down to:

One of the combomeals are a beefburger menu.

Two of the combomeals are cheeseburger menu.

This piechart was an attempt to visualise that. I have in this version kept the pie slices to make it clearer. The thing about this is that it would be no leap to start applying large datasets and %: 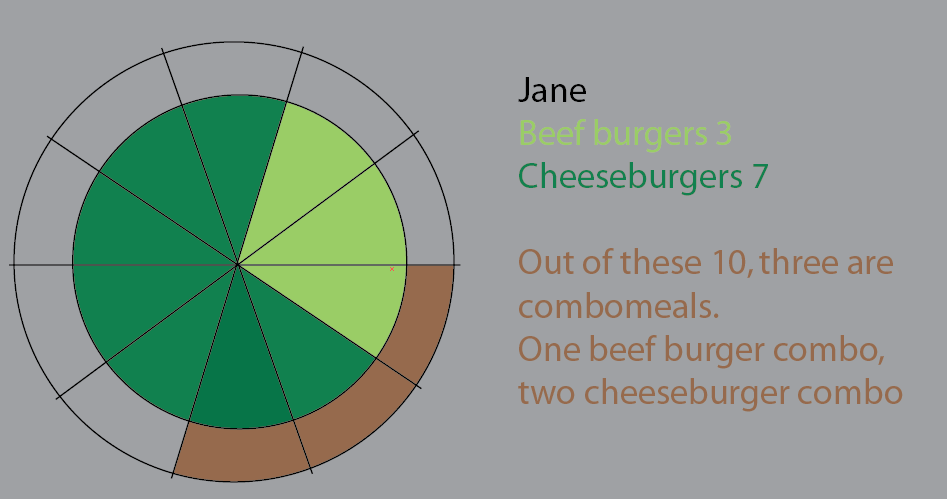 But I think the best way is to rethink.

Another way of looking at it, is to do it really really simple. Here it is easier to see what age groups, what weight groups and all the data you do not "have" can tell us. The data you have are not space-related, it is units only (kg, years, numbers + key/id/name):

(Edit: Egg on my face: I have replaced these images with more correct ones, as to the "all meals are burgers, not all meals are combo") 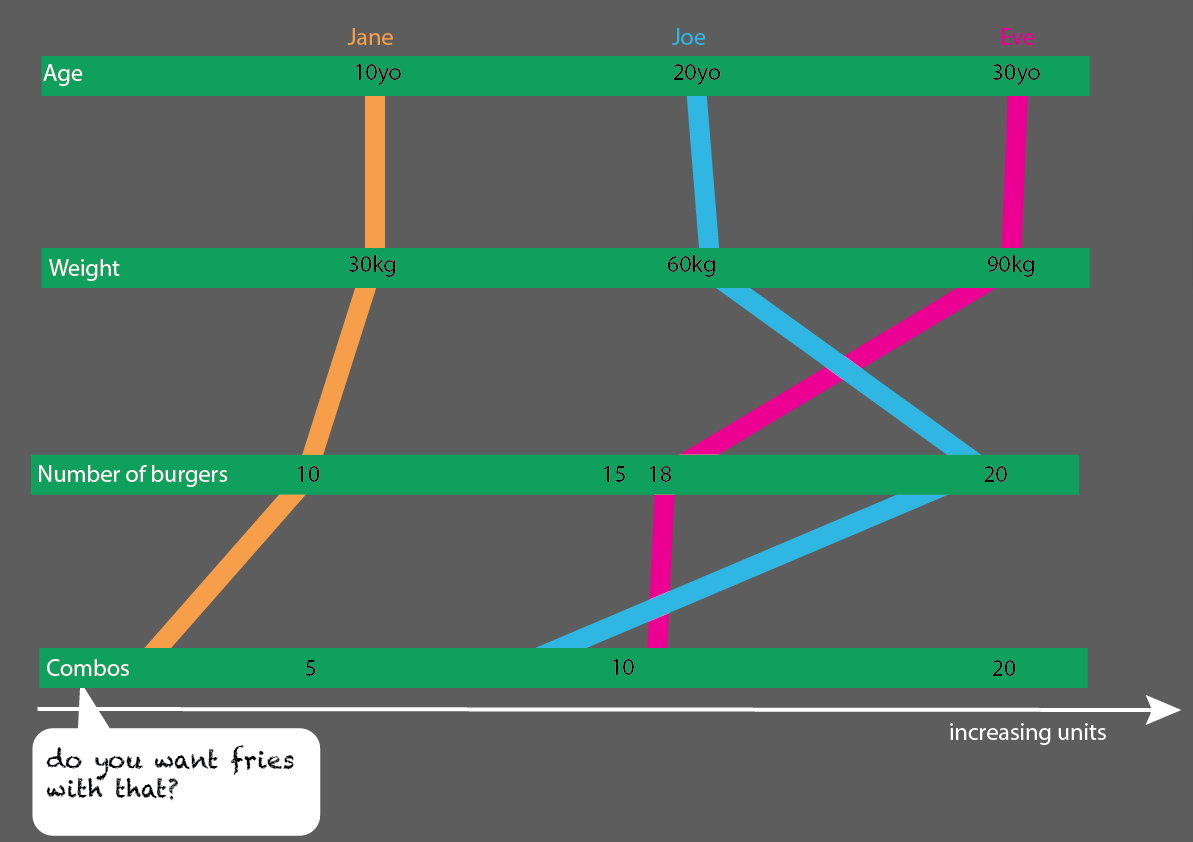 This would be pretty easy to expand with more people: 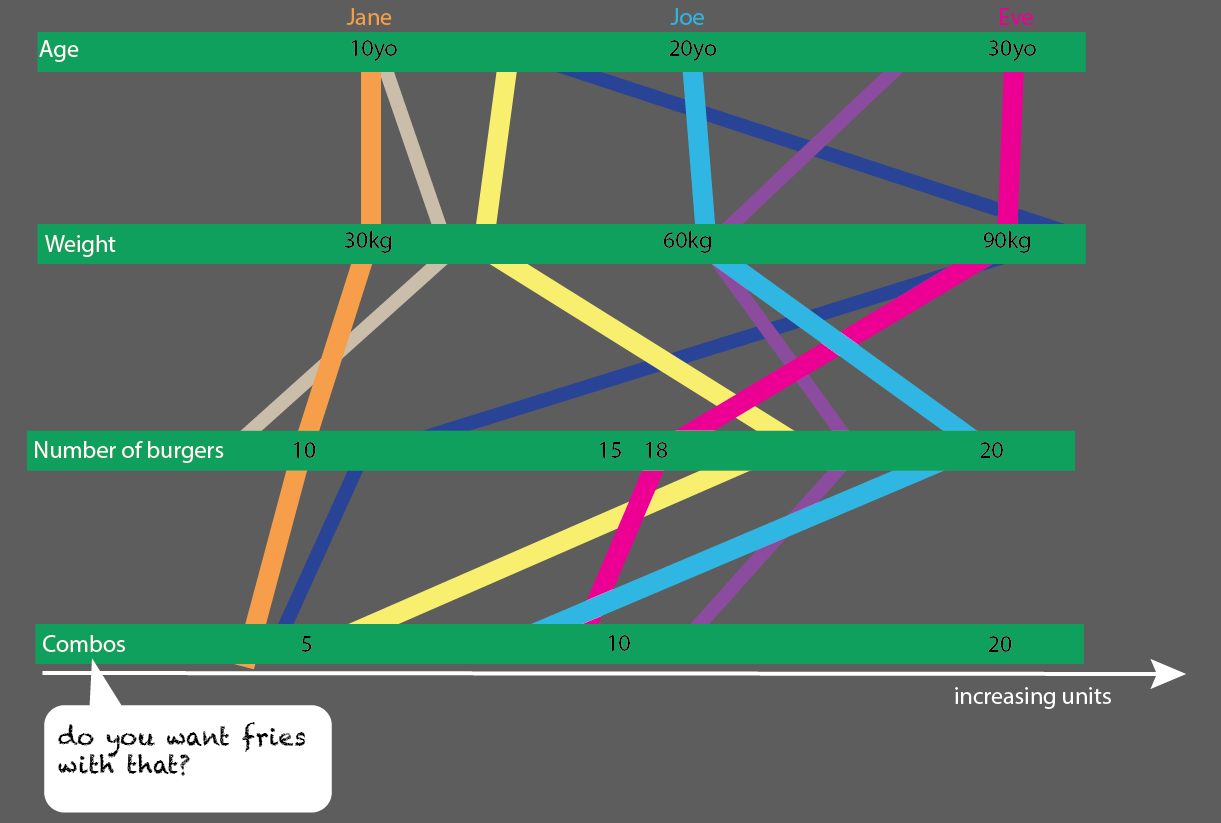 Or, even better, if you compare age groups 10, 20 and 30 year-olds, you could make a pretty simple to read statistic visualisation: 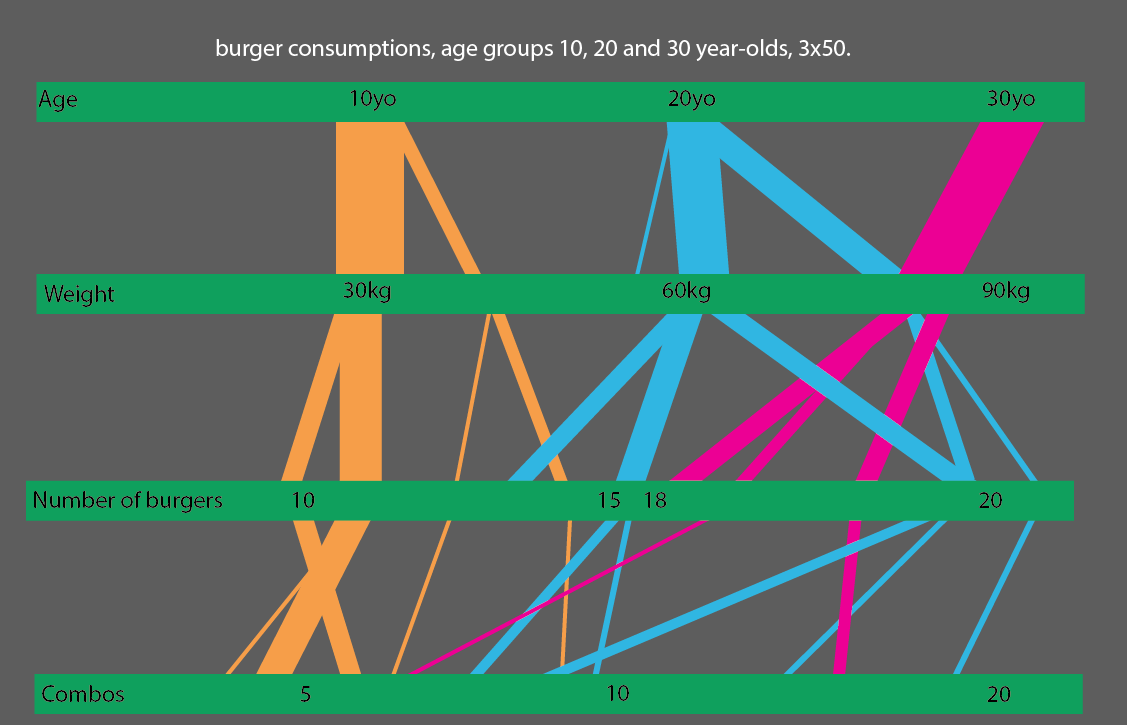 ..And just to be as clear as possible; here is an example of this way of thinking. This chart shows the survivors of Titanic, ratio of crew, class, men, women. 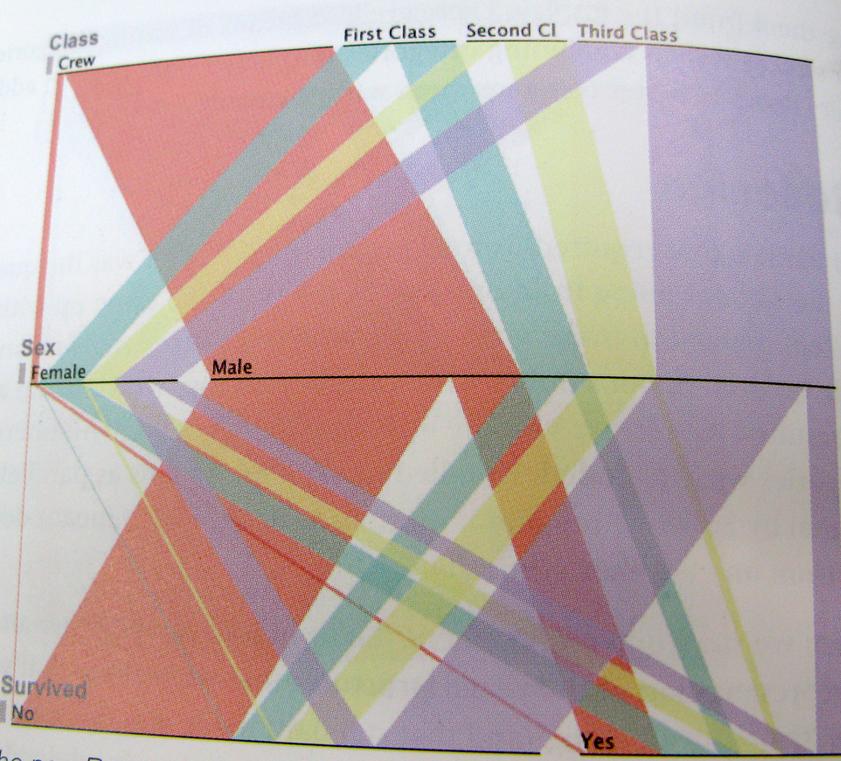 There will be loads of other solutions, these are just a few thoughts.

I could go on and on, but now I have exhausted myself and probably everyone else.

Tools to play with:

P.J. Onori; In defence of hard

Grafton, A. & Rosenberg, D., 2010. Cartographies of Time: A History of the Timeline, Princeton Architectural Press.