Illustrator variables / data-driven documents: how to batch-export one file for each data set?

With the Variables window in Illustrator you can make something a bit like a data-merge document with lots of variants for different records (InDesignâ€™s data merge is usually better, but I have to use Illustrator for this, for other features that are in Illustrator and not in InDesign).

After setting these up, you get an Illustrator document with a drop-down menu in the Variables window that lets you switch between different many variants on a template.

How do I turn this into lots of static files (or a static file with lots of artboards), similar to the Create merged document option in InDesign?

You now have a drop-down menu that lets you switch the chart between each data set you created.

Letâ€™s say there were 1,000 variants. How would you turn this into a directory of 1,000 separate files (any format: PDF or AI are both fine) with filenames based on the data set name, without manually switching and doing Save as each time?

I'd have thought there would be an option, like InDesign Data-Mergeâ€™s Create merged document, but I canâ€™t find one anywhere. Failing that, I'm sure that Actions should be able to do this, but I can't figure out how. If not Actions, maybe a script can do it.

Or if thatâ€™s not possible directly, is there a way to make one mega-file with an artboard for each data set (which can then be split into separate files)?

Yes, the data set exporting is very well tucked away.

To export the data sets into pdf's you need to do this: 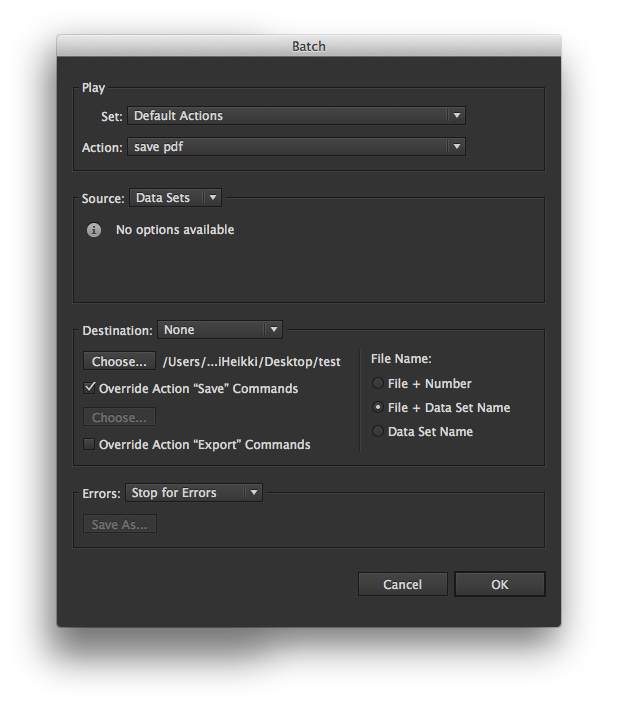 I have never used this for thousands of pdf's, so I'm not sure how long it'll take, but that should do the job.