What is the best way to make arrows in circular shape?

I need to make (actually re-creating) a diagram for a repeating process consisting of 5 steps.

I need to do basically the same thing with 5 arrows, different colors, and the arrowheads not sticking out... essentially a donut shape.

The arrows also contain text, but that's not a big deal since I can flatten each arrow if the solution involves handling them as separate objects.

I've already tried making the arrows in a straight line and making an art brush, but AI gives me an error saying "The selected artwork contains an element that cannot be made into an art brush." ??? I removed the text just to make sure that wasn't it, but the error still happened.

I also tried making a donut from 2 circles, making compound path, and using the knife to divide into sections... made a nightmare mess out of that. It's nearly impossible to cut a straight line that isn't exactly horizontal, perpendicular, or the exact in between of those.

It looks so simple! Am I just being obtuse? :p

The easiest method is to simply use strokes with arrowheads.

for 5 arrows, you simply divide a circle into 5 sections, apply your stroke and arrowheads, then expand and use the Shape Builder Tool. 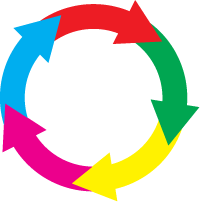