Darker shade of a given color

What does it mean and how do I get a darker shade of a given color. For example if I have the color

What value do I change in Adobe Illustrator CS5 or Above Photoshop so that I get a more darker/solid/bold look of the same color?

As CK1 says, getting a darker variant of a colour using HSB/HSV and HSL (Hue, Saturation, Brightness/Value or Lightness) scales is easy. Reduce the variable that corresponds to brightness, lightness or value. In both HSL and HSV, that takes you straight down towards black, keeping the same hue and saturation. (HSB is basically the same as HSV) 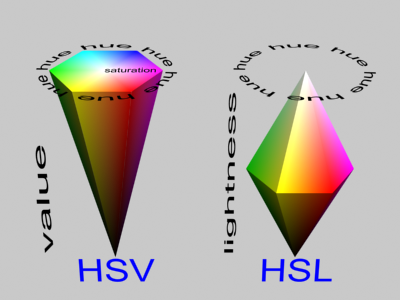 In RGB scales (and remember that both RGB and CMYK colours can be manipulated using HSB/HSL), it's also pretty easy. Reduce the amount of Red,Green, and Blue by the same relative amount - resulting in less light but the same ratio between each type of light. If you think of it like a 3D cube where Red,Green,Blue each have a dimension...

Hex codes are just RGB values written in Hexadecimal format. The first two characters after the # are Red, then Blue, then Green. Hexadecimal means counting in base 16, which looks like this:

The internet is full of formulas and snippets of code to convert hexadecimals to regular (base-ten) numbers.